The Eurozone Crisis: Not a Matter of Fiscal Irresponsibility

A currency union has inherent problems, as mentioned last time. But despite these structural problems, when a crisis like this happens, people naturally want to find someone to blame. So, is any country to blame for the current mess? Are the PIIGS responsible for dragging down Europe with their heavy government debt?

The PIIGS as Victims, not Free Riders


When it comes to the sovereign debt crisis, we often think of the struggling countries as welfare states. Not only does welfare expenditure put a huge burden on public finances, under the welfare system the citizens don’t have an incentive to work hard, so these countries are to blame for the economic mess they’re in. 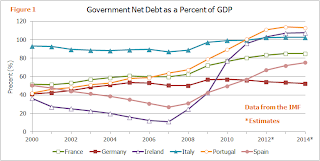 These criticisms may all be true, but we’ve missed an important part in the picture. Though Germany doesn’t want to admit it, the Greeks and the Irish aren’t entirely wrong when they blame the Germans. To a certain extent, Germany does gain an unfair advantage from the cheap currency – which boosts its net exports and enables it to earn more foreign money – at the expense of less productive countries in the eurozone. 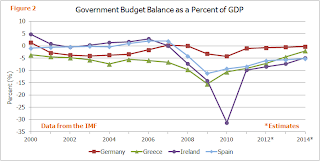 (Comment: The euro crisis is not really a matter of fiscal irresponsibility. As shown in Figure 1, some of today’s distressed nations only had a small public debt burden at the onset of the crisis. By the way, since Greece’s government debt was very high – at 143% in 2010 and 161% in 2011 – it’s left out of the chart to ensure the other data points are clearly shown. For an explanation of the difference between net debt and gross debt, please refer to this article by two professors at INSEAD.

Figure 2 shows that Spain and Ireland in fact ran budget surpluses from 2005 to 2007. They’re not free riders but are victims suffering from the lack of an adjustment mechanism to deal with recessions. They’re the casualties of the structural problems in a suboptimal currency union.

Whether competitive economies like Germany and the Netherlands benefit from the euro is a debatable question. Some argue that they’ve lagged behind similar countries that chose to stay out of the eurozone, such as Switzerland and Sweden, in economic performances since the launch of the euro. But others refute that such comparisons are inaccurate because they can be easily manipulated by selecting different periods of data. Still, unless the financially distressed nations exit the euro, it looks like a lot of the surplus earned by Germany over the years will be spent on the rescue funds. So it isn’t fair to say Germany is a winner either.) 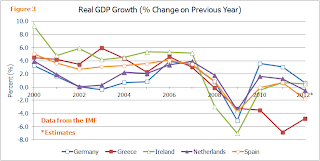 Of course, this isn’t to say the PIIGS countries don’t benefit from euro membership at all. However, with an overvalued currency and slow productivity growth, these countries can’t compete in the world economy. The lack of competitiveness is reflected by the persistent current account deficits. Though the PIIGS did quite well economically in the first half of the 2000s (see Figure 3), once the economy started to slow, they were sucked into a downward spiral. 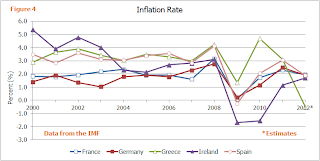 (Comment: To understand what triggered the downward spiral, we first have to understand what led to the boom period. As seen in Figure 4, inflation was high in Greece, Ireland and Spain before 2008. Under the “one-size-fits-none” nominal interest rate set by the European Central Bank, real interest rates were low in these countries. This fueled asset bubbles and led to the excessive accumulation of private debt, and was why they enjoyed fast growth before 2007.) 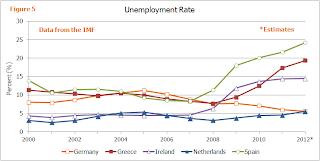 After the bubble burst in 2008, growth has slowed dramatically (see Figure 3) and unemployment rates have soared (see Figure 5). As a result, tax revenue falls and government spending on social welfare increases. Given the lack of adjustment mechanisms in a currency union, this can easily spiral into a vicious circle. As we now know, four years later net public debt in the PIIGS, especially in Ireland, has skyrocketed to record levels (see Figure 1).

The culprit of all this mess is the single exchange rate. After all, people in the PIIGS are free to choose a laid-back lifestyle. What they need is a currency that can reflect and match the national competitiveness, not an overvalued currency that raises both private and public debt.

Benefits of a Currency Union

(Comment: Given the risks and downsides of a currency union, you may wonder why the eurozone was formed in the first place. A currency union does have a few benefits. For example, it can deter speculative attacks and promote trade and cross-border investments.

For more detail, you may refer to Robert Mundell’s theory of optimum currency areas. Its central thesis is currency borders don’t necessarily have to follow national borders, because if there is high labor mobility in a region, freely floating exchange rates aren’t necessary to adjust for imbalances. This provided the rationale for the creation of the euro. However, it’s now clear that without a common language and a common social welfare system, the labor mobility in Europe won’t be high enough to correct economic imbalances.)

< Previous   The Eurozone Crisis: Problems of a Currency Union

The Eurozone Crisis: Differences between the U.S. and the Eurozone   Next >

Posted by lawrencekhli at 11:03 AM

In this blog, I’d like to combine my interest in writing with my passion for business and economics. My hope is to create informative and insightful articles and share them with the world. Thank you for coming and you’re most welcome to follow my blog!

Lessons from the 2012 Olympics

How to Increase Your Competitiveness and Land Your Dream Job

The Use of Knowledge in the Workplace

The Future of the Euro Area: Growing Closer or Falling Apart?
The Eurozone Crisis: Not a Matter of Fiscal Irresponsibility
The Chinese Economy: Structural Imbalances

lawrencekhli
I graduated with a bachelor degree in economics from the Chinese University of Hong Kong, having studied a variety of subjects from economics and math to philosophy and translation. With a passion for international exposure, I attended UC Berkeley as an exchange student for one year, where I enjoyed the cultural diversity a lot. Also, I like writing and I’ve published a book titled Write it Right: A Writing Handbook for HKDSE Students. The book contains 15 essays and can be found in bookstores in Hong Kong. I now work at Citibank.